After the lovely gulpoli for the first important festival- Makar Sankranti in Maharashtra, lets move to the second next important festival.. the festival of Holi, which comes sometime in March and (in food) is famous for the yummy Puran Poli, a very famous marathi dish that I specially prepared today for RCI Maharashtrian Cuisine.. Holi is incomplete without the naivedya (prasad) of Puran Poli. It is served with katachi aamti whose recipe will follow soon.
Holi in Mahrashtra is celebrated on full moon day in the month of Phalgun- sometime in early March. On this day, a bonfire is made using a branch of eucalyptus tree, wood and dungcakes and this bonfire is worshipped by presenting a naivedya (prasad/offering) of PuranPoli and cocunut.. The bonfire symbolizes the destruction of evil and bad thoughts. Scientifically, the bonfire provides with some relief from the cold in March :D On the second day, Dhuliwandan, people play with colors and water. In Maharashtra, the festival of colors is less observed on this day, but is celebrated with full josh on the day of “Rang Panchami” which comes 20-21 days after holi... Actually schools and colleges have holiday on RangPanchami and not on Dhuliwandan.. But who cares... People like me used to celebrate Dhuliwandan in college with friends and Rang Panchami with relatives and friends later.

I have been eating this puran poli from childhood.. not just on holi but on special occasions/festivals such as Gudhi Padva (Maharashtrian New Year), Bail Pola (a festival where farmers honor the bullocks used at farms) or as a “shahi bhojan” for visiting guests. But this was my first chance to try my hands at it.. I had a tough time making these.. the pictures can say more.. but I didn’t have time and patience to make it again.. so decided to post the recipe wit the sad pictures.. will change the pics next time I make better ones which I dunno when coz my hubby doesn’t like puran polis and I am too lazy to take so many efforts to prepare it just for myself… Actually the taste was perfectly as expected but the looks and profile were not as expected ;) Thought of ditching it, but then had planned it for RCI. As long as I can promise the sincerity in taste, I am sure u'll excuse me for the pics :D 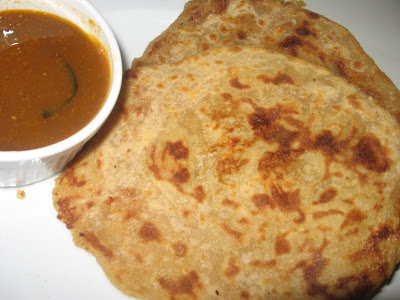 Puran Poli is bread stuffed with a sweet chana daal mixture called puran. In the early days before the invention of mixers and puran machine, a stone grinder called "pata warwanta" was used to make the puran. Hence puran poli might have been a big fuss in earlier days, but not anymore thanks to so many inventions popping up every other day! :) The process of making puran differs within parts of Mahrashtra. My mom directly mixes the boiled chana daal with sugar/jaggery and then grinds it in a mixie while my mummy(MIL) again cooks the boiled chana daal while mixing it wit sugar. Use of sugar makes the polis soft while adding jaggery is better for calorie conscious guys ;) I usually mix them in equal amounts for a win-win situation. :) Only one of then can be used according to desired sweetness.. doesnt matter for gourmets!! ;) The puran poils are usually of size of normal roti, but in Northern Mahrashtra region (known as Khandesh), the puran polis nearly 3-4 times the size of normal roti, say 10-12 inches in diameter. They are prepared on the earthern gas- “chulha” using a special eathern vessel called “khapar” as the base for cooking/roasting the puran poli. These puran poils are called “khaparachya puran polya” and are usually folded after cooking so as to ease the eating process. In the summer season, these are served with Aamras (Mango pulp mixture) while at other times with rice kheer. In the other regions of Maharashtra, puran poli is served with katachi aamti, the perfect combo! For the time, enjoy Puran Poli, katachi aamti will soon follow :)
Puran Poli 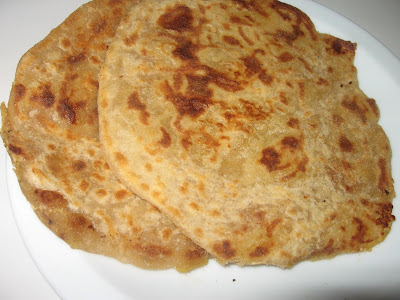 For the covering:
1) Sieve both flours and mix well
2) Add salt and a tsp oil and knead to a really soft dough and keep it aside in another plate
3) In the kneading pan, spread some oil, add some water and then spread the dough evenly over it and cover with a thin wet cloth and keep aside for an hour

For the filling (puran):
1) Cook chana daal with ample quantity of water in cooker for 2 whistles
2) When cooker cools, remove daal and place in a strainer to remove water. *Retain* this water for Katachi Aamti. This water is called Katache pani.
3) Add grated jaggery, sugar, cardamom powder and nutmeg powder to the daal. Cook in a pan for 10-12 mins stiring constantly
4) When cold, put in a puran machine/mixie. Thin smooth lumpfree puran is ready for puran poli
5) If the puran is watery, tie in a cloth and hang it for sometime to remove water from it.

Putting it all together:
1) When its time to make puran polis, knead, knead and knead the dough to mix the added oil and water and to make the dough lump free(if any)
2) Take some dough and knead it well. Now roll it using rice/wheat flour. When its as big as a puri, put a big ball of puran at the center and close from the sides so that puran does not come out.
3) Roll to size of roti taking care that puran does not come out (this happens with first timers like me :D)
4) Put some ghee on hot girdle and place the puran poli over it.
5) Add ghee on sides and when cooked, flip to cook on other side as well.
6) Serve with spicy katachi aamti!
Posted by Arts at 12:27 AM

I tried your puran poli recipe and the polis came out amazing! Thanks a lot for the perfect recipe!