After Gulpoli and Puranpoli for Makar Sankranti and Holi respectively, its time for the biggest festival celebrated in Maharashtra, the Ganesh Utsav/ Ganesh Festival.. Lord Ganesh/Ganpati being the favourite god of all Maharashtrians, this festival is celebrated on account of His birthday. :D It comes sometime in Septemer, on the day of Vinayak Chaturti [4th day of the month of Bhadrapad] and lasts for 10 days, ending on the day of Ananth Chaturdarshi.. On the first day of this festival, people bring home Ganesh idols made from clay. For the next 10 days, the idol is worshipped- Puja, Aarti and then Naivedya/Prasad. :) The last day is the day of “Visarjan” when the idol is immersed in water saying “Ganpati Bappa Moraya, Pudchya Warshi Laukar ya!” (Come soon next year!) Some people do the Visarjan after 11/2, 2, 5 or 7 days.

Here are some artistic pictures of Ganesh representing His different names. These pictures came through a forwarded mail with the title “Akshar Ganesh” and were so artistic that I thought of sharing it with you people! Open in new window to view original size! 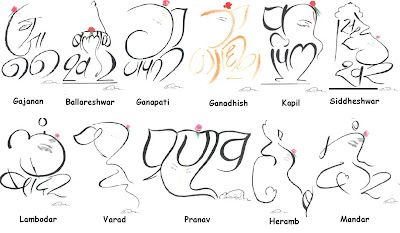 Ganesh Festival celebrations were limited to homes until Lokmanya Tilak, a freedom fighter from Maharashtra, started this festival as “Sarvajanik Ganesh Utsav”(public Ganesh Festival) in the pre-independence period in Pune, with the motive of getting people together and celebrating the festival which provided an easy opportunity for the freedom fighters to convey their ideas about independence to the public. Till date, people from Pune and from other cities in Maharashtra celebrate this festival with full josh! There are big Ganesh idols at every nook and corner by small and large societies/ mandals. The Ganesh festival from Pune and Mumbai are very famous and people come down from nearby places to watch the last day procession (called “Visarjan Miravnuk”) which sometimes lasts for 30-32 hrs. A large amount of money is spent on sets and decorations for the 10 day celebrations as well as for the procession.

Coming to the important part of the festival.. yes obviously the feasts :) Ganesh festival is incomplete without the naivedya of Ganesha’s favourite food-the modaks.. Modaks are prepared in different ways, some can be the stuffed ones and some can be the ones made from khava/mava. The stuffed ones can be normal fried modaks or the steamed ukadiche modak. The khava modaks are just khava put in moulds and comes in various flavours like amba modak, pista modak etc. At our place, mom makes the fried modaks which I’ll post some other time. Today I’ll be posting Ukadiche Modak for "RCI Maharashtrian Cuisine".

Since these were never prepared at my place, I used to eat them like a “havrat”(greedy) whenever I got a chance to :) Especially at my workplace, where a big ukadicha modak used to be a sweet dish once every 2-3 months. We generally used to have team lunch and on such days, there would be 4-5 modaks infront of me, generously given up by calorie conscious and non-sweet eating colleagues! :) My love for sweets and chaats is well known by most of my friends :) Since I fast on chaturtis, I decided to try these as Naivedya for last week’s chaturti. I followed the recipe mostly from Mumbai Masala. This seemed to be one risky recipe to try hence started with small amounts :D The modaks turned out very well.. heavenly taste!! I am sure Lord Ganesh wud have been happy with the naivedya ;) the only problem was that the covering turned out a bit thick than expected. The covering seemed more than the filling. The covering wasn’t getting rolled properly and was breaking so often hence had to make it thick. And the shapes of just 2 modaks seemed perfectly like modak.. Hence it’s just these 2 modaks for you guys.. enjoy!! :)
Ukadiche Modak 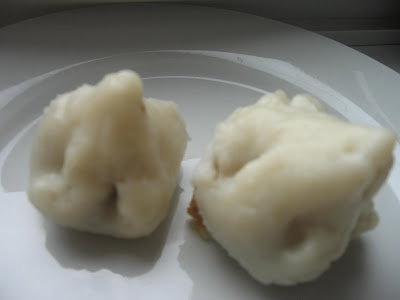 For the filling:
1) Heat a pan and put jaggery in it
2) When jaggery starts melting, add 1 tsp Ghee and coconut to it
3) Mix well and cook on medium heat for 5-6 mins
4) Add cardamom powder and roasted poppy seeds
5) Filling is ready, keep aside to cool

For the covering:
1) Boil ½ cup water, add ghee to it
2) Add rice flour to boiling water and miz well stirring continuously
3) Add salt, mix well and cook covered for 2-3 mins
4) Remove from heat and knead well into a soft flour when its hot
This dough is called Ukad and hence the name!

Putting it all together:
1) Divide the dough into small balls
2) Roll each ball to size of puris
3) Place this on the palm and add some filling to it
4) Bring together the ends in form of plates and form a tip and seal
5) Repeat the procedure for rest of the modaks
6) Put these modaks in a steamer/cooker (do not put weight/whistle) and steam for 15-20 mins. The abobe ingredients make 7-8 modaks
7) Serve hot modaks with Ghee… aahh.. they just melt in the mouth.. Oops.. did we forget to offer the naivedya/Prasad?? ;)

This is also my entry for WTSIM-Stuffed Dumplings... I hope the modaks qualify the deadly tests ;)
Posted by Arts at 8:53 AM

ur each and every entry for RCI looks fantastic aarti:) i am going through all the recipes now

Thanks Asha and Sukanya,
I am known as Chatterbox among friends.. and there arent any Indians to talk to.. so blogs is the only place i can talk about all things :D I am glad u liked my Modaks!

Thanks Sia!
Hope u try some of them!

Hi aarti,
ur modak looks yum!!!
Thanks for sharing the useful info of ganesha.
pls do visit
http://senthiya.blogspot.com

Aarati your blog is fantastic. just loved it feel like grabbing one of those and eating it.

Aarti, your Modak looks gr8!! We make a similar dish in Karnataka called "Kayi Kadubu". The shape is a little different, though.

Thanks Priar,
Good to find someone as religious as I am :)

Thx Pooja,
Grab one for urself n leave the other one for me :D

dear Aarti, you have so many beautiful entrties for RCI. the modak looks so beautiful. you have so much passion for cooking traditional maharashtrian food. I have cooked some recipes form your blog for RCI, is it ok for you. I thought instead of typing the process again I will link my blog to your recipes. if its fine with you please let me know through email.

this is exactly why we run these events... i just new there would be fascinating dumplings all over the world and really intriguing stories behind them! thank you so much for your entry... of course they qualify and if they didn't, we'd bend the rules ;-)

Thanks Sharmi,
My pleasure!

Thanks Thepassionatecook,
I am so glad my entry counts in! :)

What an awesome blog ! Ekdum Mumbai chi aatvan aali ... Thanks for the recipe... and yes, the lil' preface about the festival is also great ! Sahi aahes ga tu !!!

Hi Arti...very nice blog..speaking abt ukadiche modak instead of only water for ukad try 1/2 water and 1/2 milk it gives nice texture n flavour to ukad. ur modaks looks yummy...

Hi Aarti,I love cooking a lot..just trying to learn-cook new things everytime I see anything new on internet/TV shows.. :)Was searching for the Ukadiche Modak & got it here.. will definately give it a try..if they taste yummy, will definately share with my colleagues.. :)

its really very nice to see this i like this posting thanks for sharing this with us...