Some foods are close to the heart not due to the taste, but due to the memories associated with them. For me, Vada Pav falls in the category of food that always takes me back to college days. This post is dedicated to my dear college friends: Shill, Saii, Megh, Poo and Ridd! All 6 of us enjoyed our 4 years of Engineering together in a girls college.. Its exactly 3 years down the line that we left college.. Kisiko yaad bhi hai ki 21st-22nd June ko hamare project evaluation tha?? One thing we all loved was the Vada Pav at the college canteen. It was one of the best vada pav I have tasted.. Priced at just 4 rupees then, it used to be our regular favourite snack after 2-3 hours of lectures and boring practicles. Though we had decided that after college when we start earning, we would drop in college sometime to have vada pav together, the day never came.. Everyone got busy in their lives and some shifted to other city. Though 4 of us worked in the same company, we didn’t get a chance to go back to college together, now that we had found new joints near office. But sometime later we came to know that the caterer in the college canteen had changed and the new caterer was not so good.. so now we are just left with the memories of the vada pav and all the 4 years we spent together in that canteen eating mostly vada pav :) To cherish those memories, I made vada pav today and decided to post it.. So here’s our favourite snack gals.. toot pado ;) Also its Ridd’s bday today and Poo’s bday 4 days down the line.. Wish u a very happy birthday sweeties.. hope you have gr8 time with ur dearest….. Btw, Ridd those chillies are specially for you.. remember you used to be the only one who used to eat all those 7-8 hot chillies that we got with these 5-6 vada pavs :P And since Megh is in India, I know you will plan to meet up.. And I am the only one who’ll be left out :(( Do miss me :(

For fellow bloggers.. here’s some background about vada pav/wada pav.. It can also be called Indian Burger. :) It is a famous snack in Maharashtra, where vada made from potato (batata wada) is placed in a special type of bread called “pav” and is served with some chutney and chilli. The batata vadas are prepared using mashed potatoes, onions and some fresh spicy ginger, garlic and chillies. They are then coated with besan/chickpea flour and fried.. Pav can be replaced with any other bread (except sweet one) or vada can be eaten alone, provided its hot n fresh! 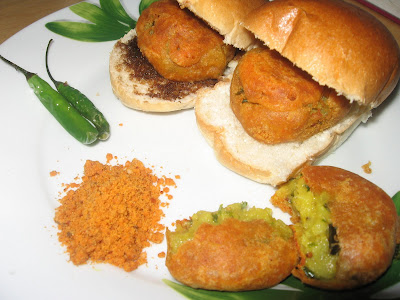 In Pune and Mumbai, vada pav is mostly sold on roadside thelas/joints. The most famous chain in Pune for vada pav is “Joshi Wadewale!” My personal opinion, the vada pav at the thelas taste equally good.. There’s one such thela in Kothrud area, opposite Jagruti sweets.. Its popularity is proved by the crowd there which seems to be competing to get their share! :D 2-3 vada pav’s can substitute a full meal for me :) So here’s vada pav which goes for (obvi) “RCI Maharashtrian Cuisine”, “V of Indian Vegetables” and “WBB #12- Spice it up!” 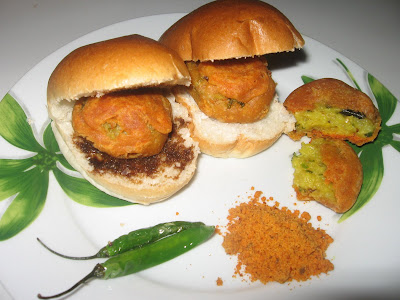 1) Mash boiled potatoes, grind garlic, ginger and green chillies to a paste
2) Heat 2 tbsp Oil in a pan, add curry leaves, mustard seeds, cumin seeds and asafetida.
3) When mustard seeds start spluttering, add the paste and sauté for 30 sec
4) Now add onion and fry till it turns brown
5) Add turmeric and mashed potatoes and mix well. Add salt as desired
6) Cook covered for 5-7 mins and leave aside to cool
7) When mixture cools, make small balls and flatten them a bit
8) Make batter by adding water to besan; add red chilli powder, turmeric, soda and salt to it.
9) Heat oil in a pan. Dip the balls in batter and slide in hot oil
10) Deep fry on both sides. Fry on medium gas to cook it evenly.
11) Serve hot with some chutney and green chillies

* I served this dish with dry shengdana chutney and fried salted chillies. I also applied some sweet tamarind chutney to one pav.. its the way I like it :)
Posted by Arts at 5:15 PM

YAY!!! You know Aarti.before I made Bhakarwadis ,I was planning to make these Batata Vada and Vada Pav.Then I ran out of Pav and made Bhakarwais!!:D
This is my fav snack.Thank you so much for this.I knew the recipes but just makes me happy to look at them:))

Arts as u have mentioned not to jump directly to the picture..I first did that and then read the stuff above...Way to go girl u wrote good stuff...this is first time I came to ur corner and its a nice place...keep writing and posting good stuff...and don't forget to cook it when we meet :)
-Megh

Thanks Asha,
I think there can hardly be any recipes which are new to u :) Aapke saamne koi kya bole???? :D

Thanks Ramya,
Try out sometime!

What a great story! And so sweet to make this awesome looking vada pav just for old friends!

That looks yummy.I never tried vada pav.I will make them for sure sometime.I am sure my husband would like them.

man, you are one enthusiastic cook. cant get enough of your recipes. lovely post.

hi aarti...
i was just surfing anita's blog 'a mad tea party' and landed on yours,,,,,the story of your Gang of 4 and vada pao...brings me back memories of my gang of 4 and the great samosas,,,,i miss those carefree college days and the final project presentation blues tooo...liked your post and probably will give this to hubby in breakfast tomoorow,,,,,lots of best wishes.....
shilpi

Just wanted to make a small observation, the wada pav vendors in pune, joshi and JJ garden people, never add onion to the mixture. For some reason, it changes the whole taste. I know this, because i've tried both with and without onion when preparing this dish. I used to live in Camp, so i was a very frequent visitor of the wada pav stands... ahem for a snack in the evening.

Nicely writen! This reminds me of my college days...And yes we love aamcha vada paav

I wish not approve on it. I think polite post. Expressly the appellation attracted me to be familiar with the whole story.

Genial brief and this mail helped me alot in my college assignement. Gratefulness you as your information.